D’Artagnan, a young Gascon youth, sets out from his village with the hope of joining the regiment of the King’s Musketeers. As soon as he arrives in Paris he gets into trouble, first entangling himself in one, then two and finally three duels, all in one day! And with men from the very regiment of Musketeers he had hoped to join! But his adventures don’t stop there; before long, he becomes involved with the affairs of the Queen, Anne of Austria, herself and must enlist the help of his fellow Musketeers Athos, Porthos and Aramis. Together, the four friends journey through France escaping from the nets of the Cardinal and his dangerous spy, Milady, while all the time fighting duels at the slightest provocation. 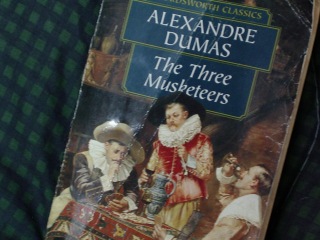 I love the summary given at the back of the Wordsworth edition. It describes the book perfectly,

“One of the most celebrated and popular historical romances ever written. The Three Musketeers tells the story of the early adventures of the young Gascon gentleman. D’Artagnan, and his three friends from the regiment of the King’s Musketeers – Athos, Porthos and Aramis.


But their most dangerous encounter is with the Cardinal’s spy, Milady, one of literature’s most memorable female villains, and Alexandre Dumas employs all his fast-paced narrative skills to bring this enthralling novel to a breathtakingly gripping and dramatic conclusion.”

The characterization in this novel – especially of Milady and Athos – was so good that I actually wanted to meet the characters! The movie on The Three Musketeers does not do justice to either character. Milady reaches depths of evil and horror which aren’t shown in the film. All we see is an ambitious young woman who despite what she does, loved someone once and wasn’t truly evil. But in the novel, the description of Milady and the suppressed animal within, how she is able to ensnare anyone while putting on an act, her ability to sense every weakness in man – all are so wonderfully drawn. As for Athos, he is shown as the true nobleman that he is, and his quiet way of handling even the most alarming of situations makes him particularly attractive while at the same time remaining mysteriously charming. Though not the hero of the novel, he is the most important character and the leader of the Musketeers; Keith Wren, in his introduction to The Three Musketeers sums it up when he writes,

“For Dumas – and for us – it is the three musketeers – Athos, Porthos, Aramis – who represent the fantasy of eternal youth, a refusal to compromise with the greyness of the modern world, the glorification of the undying spirit of adventure.”

I keep forgetting that The Three Musketeers is historical fiction. The Cardinal Richelieu, King Louis XIII and Queen Anne were actual historical figures, as was the Duke of Buckingham and his murderer, Felton. Alexandre Dumas has fashioned a unique story with these real live characters. It was rumored that the Duke was in love with the Queen of France (this is also mentioned in The King’s General), and in this novel the flirtation was embellished, with Queen Anne and the Duke having many secret meetings. The various love triangles in this novel make for a lot of intrigues, a lot of duels, and most of all, a lot of jealousy!

“It is a curious coincidence that no poet, or shall we call him investigator, has ever lived to conclude this particular story. His work has always been finished by another.”

So says Doctor Carfax in Castle Dor. The words have an eerie quality when we learn that Sir Arthur Quiller-Couch died before completing his book which was later finished by Daphne du Maurier. The legend of Tristan and Iseult is one that has haunted poets and novelists alike with more than one version still extant. Castle Dor deals with the same legend set in 19th century Cornwall.

The legend
Tristan, a young knight and nephew to King Mark, brings home the Irish Princess Iseult who is to marry his uncle. The young couple accidentally (or intentionally in some versions) ingest a love potion meant for King Mark and Princess Iseult. They fall madly in love and pursue an adulterous relationship, hiding and scheming behind the King’s back. They are betrayed by Iseult’s maid and the King, intent on revenge, kills young Tristan with a poisonous arrow. In some versions he forgives the couple as long as Tristan agrees to leave. In this version, Tristan marries Iseult of the White Hands(namesake of Princess Isuelt), sister to Sir Kahedin, and leaves returning the Princess to her King.

Castle Dor is very detailed in the various versions of the story. We are introduced to Doctor Carfax and Monsieur Ledru who pursue the true origins behind the legend of Tristan and Iseult.  They believe that the place they have come to, known in the novel as ‘Troy’, is the actual setting of the star crossed lovers’ story. Their investigation reawakens the legend into the lives of Linnet Lewarne and Amyot Trestane. Recently married Linnet Lewarne hates her old husband. Descended from royalty her beauty and poise is matched by no other. Amyot, a Breton onion seller from aboard a ship, comes to Linnet’s inn. Even before they meet, Linnet is drawn to him by the sound of his voice. From that moment onward, their lives are connected and as Doctor Carfax realizes, they relive the original legend to the letter. He tries desperately to avert the end.

Linnet Lewarne is the reincarnation of the Irish Princess Iseult. The potion in the original legend is supposed to free the lovers from responsibility for their actions (such actions a noble knight would never dream of doing). But in the novel, although we have a certain drink, brewed and drunk by Linnet and Amyot, it is hard to absolve them of all responsibility. Linnet seems cold, harsh and cruel both to her husband and to all others who have done her no harm. Amyot on the other hand seems genuinely in love while not forgetting his duties to others. While in the beginning of the story I had some sympathy for Linnet, as the novel progressed, I found myself unable to like her.

Daphne du Maurier was the perfect author to finish the novel. Her love of old legends and stories, and the whole atmosphere created by Sir Arthur Quiller-Couch suited her own style. In fact, I couldn’t see where the seam came in; where Sir Arthur left off and Daphne began. The story was executed flawlessly.

The Historical Fiction Challenge hosted by Historical Tapestry will run from January 1 2011 to December 31 2011. The levels range from reading 20 books, (if you’re really adventurous) to reading 2 (for tentative people like me!) Here are the levels:

Although Historical Fiction is definitely NOT out of my comfort zone, I am putting myself down for the fifth category because of my busy schedule during exams! As of yet, I don’t have any books in mind that I would like to read, so suggestions are welcome. I’m thinking of reading something set in Scotland.

You don’t even have to have a blog to join the challenge. Any type of historical fiction is allowed. Each month there will be a new post relating to this challenge to which you can link your own blog post!